Introduction to the normal distribution

It would be hard to overstate the centrality of the normal distribution to statistics and to the introductory statistics course. It’s even got a cult following; for instance, you can buy a normal pillow or a t-shirt. 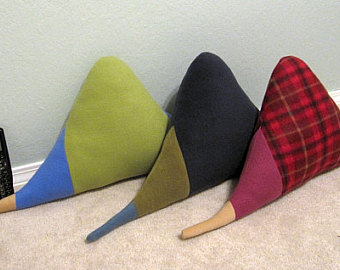 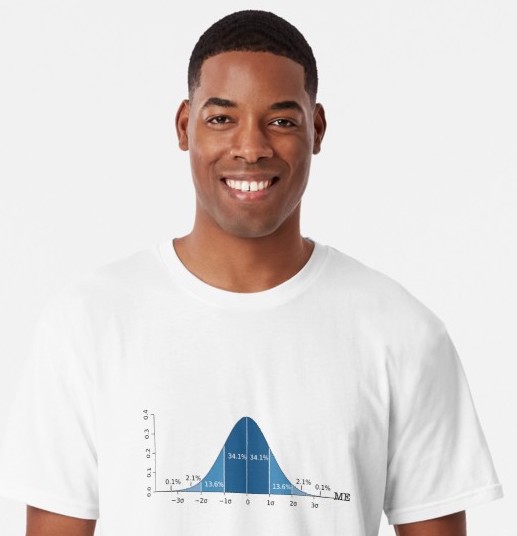 Of course, in a world of big data we could equally well define “extreme” directly in terms of the 2.5% and 97.5% quantiles of the data itself. Calculations of such quantities is problematic when there are just a handful of values and unreliable even with a hundred. So, for small data, the normal distribution provides the go-to parametric estimate.

There are many other ways that the normal distribution is used in statistics. Or, more precisely, many way in which it is mis-used. Let’s consider them in the misconceptions section.

It’s almost impossible to untangle the mathematical object that is the normal/gaussian distribution from the social idea of “normal.” The terminology of statistics, established in the late 1800s and early 1900s with seminal contributions from avowed eugenicists (e.g., Galton, Fisher) was wrapped up in “normal” as it refers to “correct” or “usual.” Terms like “error” and “deviation” are close to their everyday pejorative sense.

It’s easy for students to come away from a statistics course with the misconception that the the normal/gaussian distribution is what’s to be expected for a well-behaved variable, e.g. the message of the t-shirt shown below. 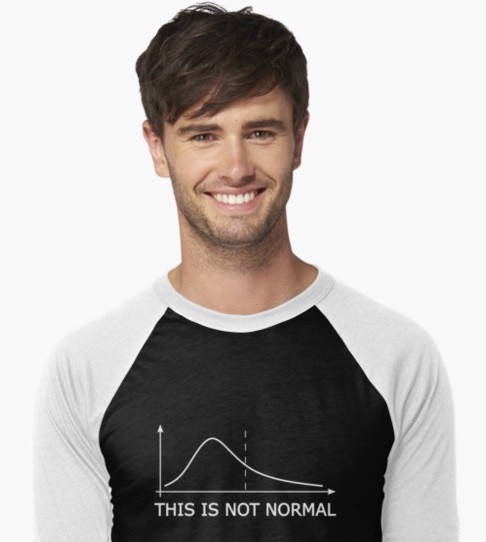 Keep in mind the large cognitive distance between the usual bell-shaped display of the normal distribution and actual data. It can help students to make the journey by starting with plots of actual data, such as jitter plots. In these plots, density is represented by the literal density of ink on the page (especially when transparency is used). Then introduce violin-type plots on top of the data to show how they represent using length the density that can be seen in the ink. Finally you may want to show the conventional density curve on its own, but think about whether you really need to do this.

The density curve itself is a mathematical shorthand that makes it easy to sketch out what would otherwise require putting lots of dots on the page. It may be helpful to your students to remind them that the underlying reality is those dots, perhaps by annotating each density curve with some data dots, more near the high points of the curve and fewer at the low points.

Show distributions of variables. For each:

Students see so much of the normal distribution that they tend to overgeneralize it. Some antidotes to this:

I examined historical records over the past 500 years of river flood heights in China, Egypt, and Europe I recorded, for each river, the year in which every flood happened that reached the level that we would now call a “hundred-year” flood for that river. Then I measured the time interval between successive floods on each river. Sketch out what you think the distribution of intervals between hundred-year floods.

Many students will draw a normal curve centered at 100 years. When they do so, some questions to ask them: - How did you decide what the value of the standard deviation should be?
- On one of the rivers I noticed that it’s been more than 200 years since the last “hundred-year” flood. Is this possible, or must it be a gap in the records? According to the distribution you drew, roughly when will the next hundred-year flood occur? (Since the mass of the distribution is near 100 years, there’s little probability, according to the normal distribution, that another 100-year flood will occur. Does that make sense?)

One problem here is that the normal distribution is not appropriate. A better shape is an exponential distribution. Very short intervals between “hundred-year” floods are very common, balanced out by very long intervals.

**Imagine observing a carnival spinner, recording the number, 0 to 100, that results from each spin. You observe 1000 spins. What will the distribution of your observations look like?

Many students will draw a normal distribution, typically centered near 50. Ask them what this implies for a betting strategy and whether such a strategy is likely to make money. Then ask them for their common-sense evaluation of such a strategy.

If you teach calculus as well as statistics, you might be tempted to point to the inflection points if the normal curve. If you do so, it should be because you want to teach a lesson about inflection points, not about statistics.

See the document on general tips for creating an active classroom.